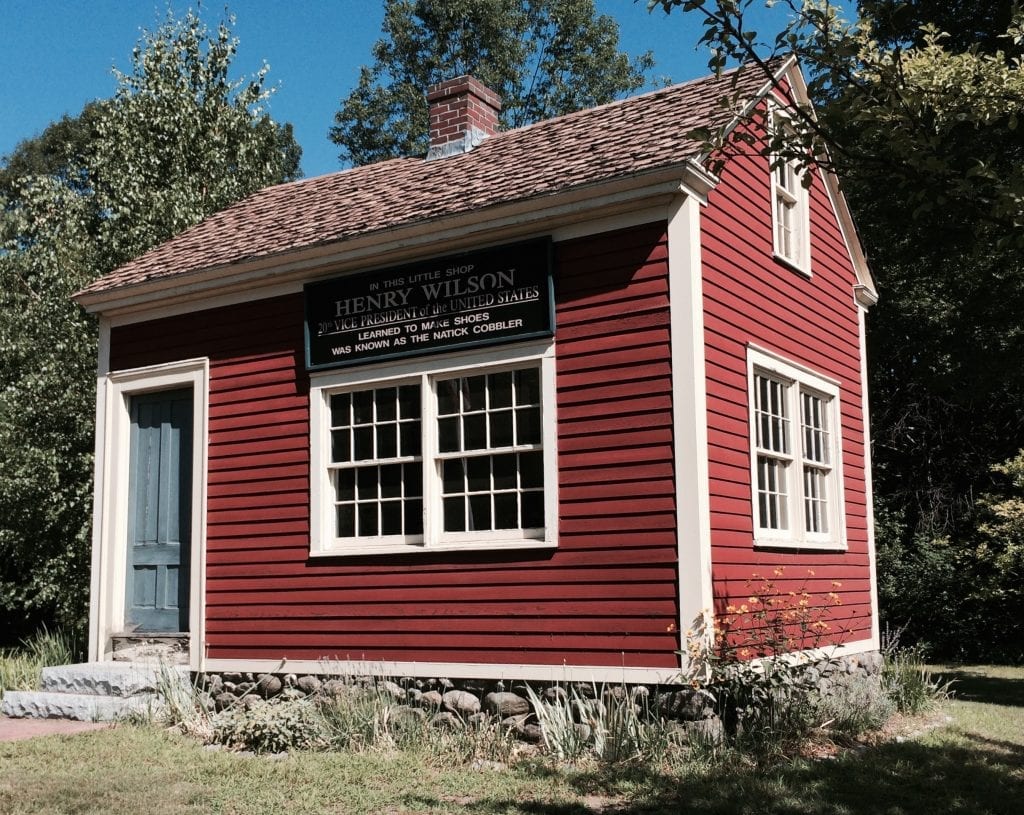 I saw a sign in front of a tiny red building that said – “In this shop worked Henry Wilson the Natick cobbler later Vice-President of the United States”. I pulled over to have a closer look. It certainly was not a house, but there was some reason that this structure was here in this spot, restored and well kept. I looked in the windows and saw some old manufacturing equipment. When I got home, I went to the Natick Historical Society website to learn more about Henry Wilson and his shoe shop. http://natickhistoricalsociety.org/figures/

Henry Wilson was an indentured laborer in New Hampshire. When his indenture was over, he walked to Natick and learned how to make shoes. The Natick Historical Society website says that this shoe shop at the corner of West Central and Mill Streets is a memorial to Henry Wilson whose home was on West Central Street. I am not sure if this building was actually Mr. Wilson’s shoe shop or if it is a representation of what his shoe shop looked like. The website goes on to say that this shoe shop is an example of a “ten footer” which was the name given for small shops or ells on houses where piecework on shoes was done. They were usually about 10 feet by 10 feet, as the name implies. According to the Encyclopedia Britannica, Henry Wilson was Vice President of the United States from 1873 until his death in 1875, serving under President Ulysses S. Grant, and he was also a national leader in the anti-slavery movement. http://www.britannica.com/biography/Henry-Wilson

Stopping at this tiny red building made me curious about the life and legacy of Henry Wilson. That’s why we preserve these buildings. That’s why I hope you stop the next time you drive by a building with a sign outside. Take a moment to think about the people that came before us. Think about a man who was an indentured farm laborer from the age of 10 until he was 21, who walked from New Hampshire to Natick, Massachusetts, who learned how to make shoes, who was a leading abolitionist and who then became Vice President of the United States. All this from a little red “10 footer”!