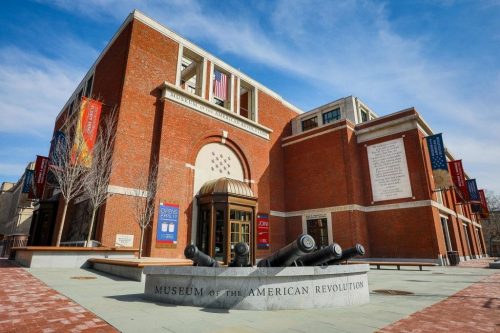 I recently visited the newly opened Museum of the American Revolution in Philadelphia. While it’s not a house museum, I was so impressed that I wanted to share my thoughts on it. The museum’s collection includes the tent that George Washington lived in during the war, so I’ll take a leap and say it has a bit of a “housing” connection.

First, there is an introductory short film. From there, the exhibits are arranged chronologically—from the origins of the revolution, to declaring independence, to the war years and then on to forming a representative government. Along the way, films are interspersed among exhibits. There are interactive screens and hands-on exhibits as well. You can even smell a type of tea produced at the time of the Boston Tea Party so you can experience what Boston Harbor might have smelled like as the tea was dumped into the water. While there is a lot of explanatory text, the items on display illustrate the key points very well.

Throughout the museum, the exhibits do not shy away from the irony of a war fought on the premise that “all men are created equal” at a time when slavery was still practiced. The exhibits clearly illustrate that the American Revolution was fought to win independence from King George while leaving the issue of slavery unresolved – leading to another war being fought on our soil less than a century later.

I highly recommend a visit to the Museum of the American Revolution. The museum is very well-designed – exploring the history of the war and the origins of our country in an engaging and informative way. The presentation does not shy away from difficult issues and leaves you with a lot to think about. Today, we have 20/20 hindsight. We know who won the war. After visiting this museum, you might ask yourself if you would have had the courage to fight for self-government against the British Empire.

« Why House Museums?
The Demuth Museum »